I am counting my days already when I will leave my country. From one side I am too lazy I don’t want to move. From another side, I can’t wait while I will be there. I come from post-soviet union country but I am moving to Malta. I really hope that I will like there. I don’t know what I will do if I will not like there. The scariest thing is to stay without money but okay I have some savings too.

Okay but not about that. Today I send a message to whats app one special man. I was traveling on my vacation to Jamaica. I was tired of my routine work, I tried not to drink and I tried not to smoke. I was successful for that almost 6 months. Earlier I was going to Alcoholics Anonymous (AA) and there is a system that for 1 month that you stay sober you get a medal, for 2 months that you get sober you get a second medal, then for 3 months of staying sober you get the third medal after that there are no medals for 4 and 5 month and next medal you get when you have 6 months of sober.

My first time in AA

First time I visit AA on 2012 and I stay sober for one month then I start to drink and continue to drink for 3 years. Next time in AA was in 2015 and there It became serious. First time I stay sober 5 months and broke, start drink, then again was 5 month and I broke and drink, then I start count days the third time. Again I get a medal for 1 month, for 2 months, and for 3-months medal instead of 3 months accidentally they give me 3 years medal, not 3 months. I realize it only after some time but I was always thinking- Why it happens? Why I have this 3 years medal? Will I stay 3 years sober? I thought there should be some meaning of it. This time again I was close to this 6 month and I start to drink.

Fourth time trying to not drink

It was the fourth time when I start again, from the beginning count days – I tried to stay sober. But this time I tried also quit smoking. In one day – no smoke and no cigarettes anymore. I quit. First time in 10 year period I didn’t smoke almost 6 months. ALMOST. I was so close. And then…I had 3 weeks vacation, 2 of them I was going to spend in Jamaica.

I feel depressed because of no emotions in my life. I am working, but each day I think that I really want quit but where…where can I quit if I don’t have another job. Nowhere and I stay, I get into a routine and do not have any happiness no emotions. I am not drinking not smoking and no emotions at all. I thought I need it.

For traveling before I used website http://www.travelgirls.com. I talk with guys there and when I had vacation I travel with them – usually one or two times in a year. One time a year I could afford to travel by myself other times I travel with guys who pay for everything. So this time I wanted a vacation but there was no one guy who would I like and would want to travel with so I decided to travel alone. First stop was London – I had a man there. He pays for hotel etc., next stop was 2 weeks in Jamaica alone. I used at the beginning in Jamaica website http://www.couchsurfing.com and it was big mistake use it in Jamaica. Okay, I just had bad lack. It was my first time to use it and I guess last time even I know I had just a bad lack.

Okay, my travel experience is another story, but there in Jamaica from all that culture shock what I have got, from all that situations where I have been involved one day I broke up and I drink vodka, I start to smoke. Actually, I travel to Jamaica because of the weed (param pam pam…lol. :D).  Oh..if you would know what a vacation I had. Crazy, crazy, crazy. Yaamaan. 😀

I will need to write a post about it. But in this post, I am writing about a special guy. The next day after getting drunk I had so big hangover. I was dying but I spend all day near the beach and in the evening I feel much better. I was sitting on the couch in hotel lobby because there was only place for wi-fi and actually I was so sad because of all that shit what was going on there in Jamaica. I thought my vacation is fucked up. I was so sad because I was so close to my 6 months soberness but again fourth time I broke.

And there was one man in a lobby who was checking in.

He asked: “How is Jamaica so far?”

I: “In general I don’t drink, but here I feel so bad that I even yesterday I start drink”.

He: “At all. 3 years already. How you keep yourself stay sober?”

I: “I am going to Alcoholics Anonymous”

I just lost words what to say. I was so surprised. Usually, people are not telling so easily that they are going to AA. I would not tell that in my country to anyone so easily. In my country, I told it just some people. There in Jamaica, I feel so empty that I even didn’t care what I am saying and to whom because I really don’t care what someone whom I will never see again is thinking about me. At that moment I could say everything about myself but I wake up when he said: “Me too.”

The guy from Canada – Willy

We have our story in Jamaica. His name was Willy from Canada. Remember I wrote that I had a medal from AA and I had one medal for 3 years but I don’t have 3 years?! I was keeping them with me all the time. I was there in Jamaica with all my medals and one of them was 3 years medal. Willy had 2 years and 11 months of being sober. We were talking about AA and I take my medals to show him how medals look in my country and you know what I realize that all this time I was thinking why I have that 3 years medal. Why they give it to me accidentally? And at that moment I understand that Willy after 1 month will have 3 years of being sober. I give that medal to him and it was the most unrealistic thing what can happen. Amazing moment. Because it seems to be too unreal to be real. 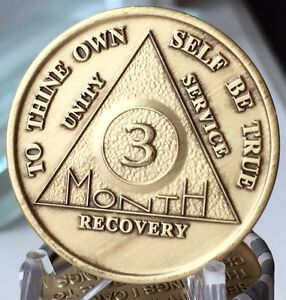 I was away from my country 10 000km, Willy was from Canada. We met in Jamaica at the moment when I feel so bad, at the day after I get drunk, when I feel dangerous. And we both met – two people from AA and I get a medal for him. That medal supposed to be for him. That is why I was keeping it, that is why it was given by mistake to me. You can not no one imagine how important it was to him. He is so deep inside in AA that he open a more than 10 recovery centers, he prays every day, he does all steps, he do sponsors, he helps a lot. Before he was drug dealer till his 36 years old. That my medal for him it was just something unbelievable. 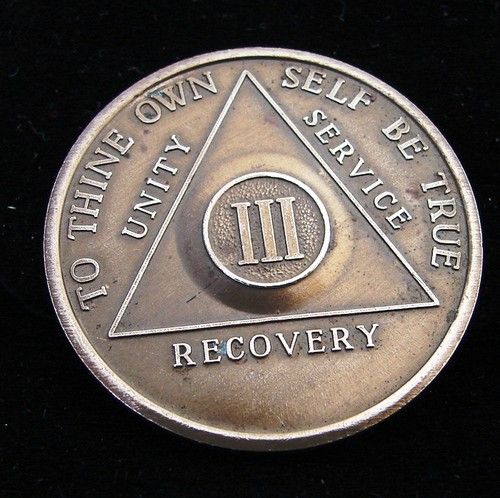 Today 12.03.2018 he had officially 3 years. We didn’t talk anymore after vacation but I remembered this date. Today I send him a message in whats app: “Congratulations with your 3 years” and got a reply: “You are so beautiful, thank you so much for this message. I almost cried”. From one side I am not sure if it wasn’t with sarcasm because we had a big argue from another side I know how much to him it means. Anyway, I will think positive and really hope that he is happy to see my message.

Thank you for reading this. When I see that someone is reading my posts I feel not alone anymore.